On Q&A last week (Monday 20th June, ABC) Josh Thomas made an interesting statement.
He said that by watching reality TV, he got an insight into who other people are. He even mentioned that growing up where he did, the first Muslim he got to know/see was via TV.

I wonder what he was watching ... it’s all well and good if the commercial TV networks actually put someone on TV who is NOT your stereotypical: middle income, Anglo-Saxon who conforms to societies ways.

Apart from SBS (and at times the ABC), pretty much all other channels conform to this stereotypical image of what Australians should look like. That is ... apart from the 'token' person.  When we view American & British TV, there is a bit more diversity but our diversity highs are when the commercial channels televise a comedy festival!

There are some really interesting people on TV,  I don't want to define people by their race but surely we can make more dramas or comedies with a reflection of who 'Australians' really are.
Posted by Ayesha at 1:08 PM No comments:

Its been about 2 years since the GFC started.

We've been quite lucky in Australia to have missed the brunt of it. Our employment took a small dip, consumer spending dipped (still is down), our savings have increased & our stock exchange took a few batterings thus lowering our super funds.

We tried to recover, stimulus packages were put together, interest rates were dropped & families started eating more at home.


It's been 2 years and we think it's all in the past ... but is it?
America is still having issues and worse than them is Greece.  Their economic woes continue,  jobs being cut, wages being lowered and now there is strong speculation that they will default on their loan.
With the prospect of the loan defaulting, it's going to greatly impact upon the markets within the EU.  Stocks and markets will be volatile and thus repercussions will be felt everywhere, including Australia. We are not immune, it is not over.
My take on things?
The leadership under Papendreou is strong, however, it's not enough.  More needs to be done to get people working and producing cash flow within society. With interest rates already near 0%, the incentive you give to taxpayers is more stimulus payments in conjunction with investment in staples such as infrastructure & education. Tourism is where things could get interesting, so the Greek government should think of incentives to let the foreigners flood in.
From our side of things, I think the RBA have been very cautious (rightly so) while we sit and wait and see what is happening in the rest of the world. If they increased interest rates prematurely, we could have had some unnecessary early bumps.  Our stock market will continue to suffer while other regions are suffering and our currency against others will also faulter.
The whole world is still in such a precarious place right now, added to the GFC woes are environmental issues that have affected Japan, New Zealand and ourselves. The impact on these countries affects the world, especially compounding its affect on us.
There's still some way to go before we're out of the woods.

I found this on the back cover of the Sun Herald yesterday. (Sunday 5th June 2011).

Taking photoshop and editing too far .... How skinny DOES she have to be?
Skinny enough to dissolve her knees.  Really, look closely, she has no knees. 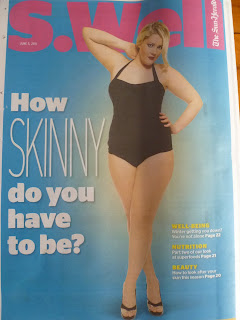 It's still blatently obvious that a normal human figure is repulsive on the cover (or back) of publications.
What's wrong with knees? I assume she has them, but I cannot see her patella, her knee dimples ... nothing. 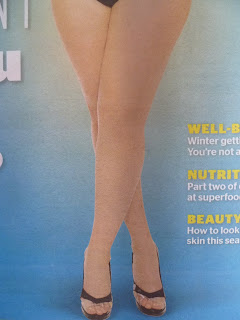 Politicians are elected as OUR representatives but I don't remember electing any of them to be role model of sexism.

Today while the Senate was sitting, a Senator made a cat-call noise (a reeeow) suggesting an in-party fight.

Why is it when Senator David Bushby makes a cat-call, it's recipient, Senator Penny Wong (it's predominantly the female) is in the spotlight?
Why isn't David Bushby's face plastered all over the online news?
Why isn't his face flashed before us on the 6pm & 7 pm news? 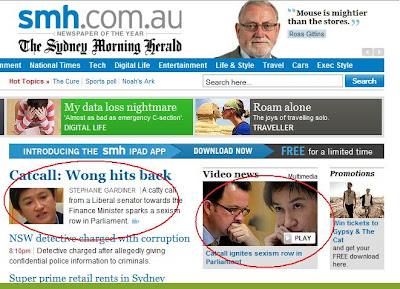 Image taken from:
http://www.smh.com.au/
Posted by Ayesha at 9:58 PM No comments: