Harold Holt.
Held office as Australia's 17th Prime Minister from January 1966 till December 1967.
Was PM for only 22 months.
Remembered for only 1 thing ... he went for a swim and never came back.

I don't know too much about historical Australian politics, just what was forced upon me in school and that just barely includes the name of our first PM, Sir Edmond Barton and that his term started 1st January, 1901. The only other fact we learnt, ok, the only fact that my memory retained was in regards to Harold Holt and his disappearance.

For some reason I have been thinking about him recently, maybe it's because it just seems so bizarre. It also sounds so very Aussie, he left parliament by going for a very long swim. I guess it sounds better than leaving with his tail between his legs at the loss of an election.

I started to think, what if he came back, albeit 42 years later? What if he came back to take back power as PM? What would he do to help steer our economy back? Which countries would he pursue trade relations with? Would the Liberal party welcome him back with open arms? And would K.Rudd step down without a fight?

I'm sure if he did return there would be lots of book deals brokered, political cartoonists and satirists would be working overtime and the rights to his movie would be sold. Holt would do the whole breakfast tv circuit thing (who wouldn't want to be on Kochie's couch?) He might even be a celebrity judge on Australian Idol or join the Dancing with the Stars troupe.

I'll tell you 1 thing Holt won't do, he won't start a swimming school!

... Being X-Tall in an Opaque World

Not only are clothes, shoes and underwear sizes all over the place, there is another line of apparel I have discovered! Women's hosiery.

I like to think of myself as an average (maybe even a centremetre below average). So why is it that the 3 sizes (regular, tall and x-tall) in women's hosiery are just so off? I'm not short and stocky nor am I tall and leggy, but I need the X-Tall so I can get into them and not ladder them while pulling them up!

I am sure the stockings/stay-ups/tights industry does really well. Women feel sexier in them and thus like to pay for designer ones with a good sheen. Its trendy to wear them in different patterns and designs, even different colours. However, I can say from experience, many more pairs of these are just thrown out after 1 use because the size was wrong or it laddered just as you put it on. 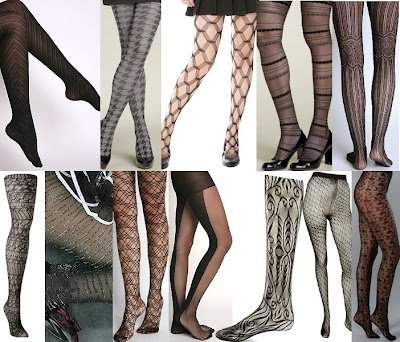 Speaking of these patterned and colourful tights, with all the marketing and promotion for these, you think I would be used to seeing them on women. Don't get me wrong, I love the idea of them but when I actually see a woman wearing blue opaques or black patterned tights, I just think it ruins their outfit.

When I was in Melbourne, I saw so many women looking good in them and I found it more normal. Bring the same concept to Sydney, it's a different story. I guess Melbournian women can get away with this sort of thing, after all it is colder there.

People like me, love routine. We crave it and feel headless when we don't. I was reading Saturday's SMH Spectrum (16/5/09) and there was an essay about getting out of your comfort zone. It went on to talk about the effects it has on creativity and a more fulfilled life.

After I came back from living in the Czech Republic, I wanted to make sure I did things differently, that I took up opportunities and met more people. As a work in progress ... I'm pretty happy with what I have been doing, I could do more. However, I have set myself up for a wonderful few weeks to look forward to and thought I would share.

I can't wait! Bring on more good times Sydney!
Posted by Ayesha at 3:01 PM No comments:

... Why bother having Earth Hour?

Recently Earth Hour was celebrated (and successfully marketed) around the world.

Why do we do this for 1 measly hour? I find it ridiculous that the whole of Sydney still has all their office lights on late at night. Are people really working hard? Or is it sheer laziness?

If we just switched off the lights as the last person leaves or the cleaners close it after their duties we wont have to waste so much money marketing Earth Hour and we would have saved truck loads from saving energy and electricity! Respect to those offices who have sensor lights!!
Posted by Ayesha at 11:24 AM No comments:

When you see a good chunk of a shopping aisle in a red hue, you know the product owners want you to see their product. And why wouldn't you? Red is an attractive, eye-catching colour. However, sometimes red can be associated with things more sinister, communism, control and anger. Well, I'm angry about Colgate's control over teeth.

Colgate essentially have a monopoly operating in the toothpaste aisle. They have essentially cornered the market in visibility and in consumption of toothpaste in Australia. There are 39 listed Colgate products on their Australia website. 39!! Why? Shouldn't Colgate Total do everything? Evidently not.

Now, I wouldn't complain if they sold great products. The thing is, I get absolutely no satisfaction from using their toothpaste. No good taste, you need to use lots to get a foam happening and there is no satisfaction after you finish brushing.

Every time I need to buy a new toothbrush or tube, I will loudly complain, "Whats with all the Colgate? while picking up non-Colgate products.