Where the Loyalty Lies


With the re-appointment of Kevin Rudd as Prime Minister, I slept well for the first time in 3 years and 3 days.  There is now a new hope for the Australian Labor Party (ALP) to climb back up the polls and possibly win the next election. (after ex-Prime Minister Julia Gillard stepped down and retires after losing yesterday's leadership ballot).

Political loyalty over the last 24 hours has been raised many times (even more over the last 3 years!) and it was clear that some politicians really struggled with their decision on who should be leader of the ALP, thus becoming Prime Minister.

By nature of who we are and the psychology under which we operate, we humans are social and loyal creatures. We thrive in an environment surrounded by other like minded people. We all want to belong to something and by belonging to something, we want to pledge an allegiance and our loyalty to that person or group.  In the workplace, we ideally work for an organisation who mirrors our values, surrounded by similar thinking people, channeling the same values, vision and being a team player.

What the ALP party members faced yesterday was a tug-of-war in the loyalty games.  Either loyalty to the incumbent PM (their manager) or loyalty to the ALP (organisation, employer).
It was a choice of either; a) Stick with Julia Gillard, the present PM, someone who is good with her team but has alienated the public and may greatly lose seats in the election.  Or b) Vote for Kevin Rudd, ex PM who was disposed of 3 years ago, someone who may not be the best with their team but will have a greater chance to win around the public and not lose so many seats or even possibly win the election. Ultimately, it was also a choice in age old, 'flight or fight' - fight for a chance for the ALP and their own seat's survival or flight, flee reality and continue pledging loyalty to the then PM, Julia Gillard.

In today's ever changing workplaces, our loyalties are constantly being tested. Redundancies, downsizing, mergers and takeovers, no one is really secure where they are and in some professional environments and circumstances, the only person you can really count on is yourself.  There have been many times when I have demonstrated loyalty to the organisation and or to my managers. Many times, my loyalty did not really count for anything.  Regardless of my attitude, regardless of my hard working nature.  Unfortunately, it seems to me these days that loyalty counts when money and business doesn't, or at least when budgets are not that tight and jobs are not in jeopardy.

So what did we learn today?
We all want to be loyal, we all want to be part of something bigger and want to be surrounded by like minded people. However, when the times are tough and people are scared, we retreat and question what we need in the search for self-preservation.  In tough situations, we too would question our loyalty.  We also need to remember that where you place your loyalty can determine your own success or failure. It's no wonder that loyalty is not lauded as it once used to be.

Posted by Ayesha at 5:12 PM No comments: 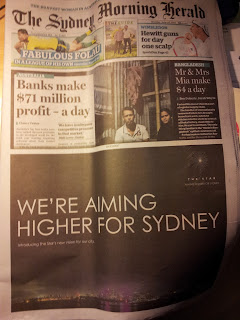 I got a little outraged today.
The front pages of today's Sydney Morning Herald was an ad for "The Star" and the casino's full spread on their "vision for our city".

The Star wanted to tell us Sydneysiders how they will aim to provide us with world-class attractions, (I.E. a bigger casino) connecting us (I.E. building a new footbridge) and making an economy out of Pyrmont, Darling Harbour and Barangaroo (I.E. where another casino is being developed).

Welcome to Sydney's Las Vegas district!
It's bad enough Crown Casino/the Packer family are pretty much doing what they want in the Barangaroo site, now The Star has decided that they want to further profit, albeit from the misfortunes of others.

I also found the ad was posted in poor taste. Immediately above The Star's ad for opulence and pie-in-the-sky ideas was Mr and Mrs Mia who barely make any money per day. The Mia's work sewing clothes in Bangladesh for major fashion houses.  The money spent on this ad could have gone in improving WH&S, training and better infrastructure for their buildings. 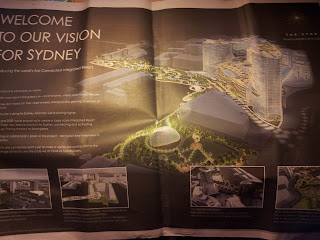 It's fairly obvious that more development and infrastructure is needed for Sydney, but should we Sydneysiders be dictated to by massive corporations? Should casinos and business at least work hand-in-hand with local council and state government to build new developments? How expensive will it be for the local to access this area?

There are some of us living in Sydney (the world) who are ethical, who don't want to do business with casinos and organisations promoting gambling.  I try to avoid visiting casinos and pokies in clubs and my investments are invested in a socially responsible manner.

I think that the people spending hours at a time at establishments like this, hoping for their luck to turn is very sad. It's poor form for casino's to capitalise on this and to dictate what developments they want to make to OUR city, especially when the buildings, parks and hotels are built at the profit of these wishful hopers, gambling addicts and misfortunes of casual punters.
Posted by Ayesha at 9:30 PM No comments:

Everyday we hear from the government, opposition, minority parties and the media that the "race card", "gender card" or the "tax card" are being played - I'm just waiting on someone to call full house.

Why can't issues be brought up? Why stay silent? Why is it that it is generally areas that we haven't got right that people accuse others of playing 'that card'?  "Discussing gender issues isn't playing the 'gender card', like how discussing tax isn't playing a 'tax card'. These are actual issues, bros." (J.Alice)

We currently have gender inequality, not just here but around the world. Pay disparity, access to education, reproductive rights.
We currently have a tax system that allows those super wealthy to squirrel away and hire accountants who know the loopholes. We haven't implemented all of Ken Henry's tax recommendations.
We currently have cultural and religious intolerance.  With our first Australians, our newest Australians and second and third generation Australians.  Injustice, intolerance and vilification.  All based on where we originated from, what we look like and insulting them by not really knowing them.

I want these cards played!  I don't want these issues trivialised with an eye roll. These are the issues affecting us daily. We will be a better country if we can discuss this in a mature way.

Safety - The #1 Value for Organisations

We all have a duty of care to each other.  WH&S is reporting spills and near misses, it is checking to see the 'slip' factor on the lobby floor when wet, it is knowing the signs of fatigue, it is letting employees know that bullying and harassment will not be tolerated.

The recent Telstra/NBN roll out is just the latest in a long line of safety scares and concerns. Lend Lease at Barangaroo, the clothing factory collapse in Bangladesh, tornado chasers in Oklahoma (who died in pursuit of 'the big one'), the truck driver ploughing into a building early in the morning, etc, etc.

I've been very fortunate with my previous employers. They have all had safety as a priority.  It is reinforced and communicated all the time, it is included in their values, it is keeping WH&S top-of-mind when pursuing strategy or undergoing any changes.

Focus on safety should not just be reserved for your immediate environment, but throughout the whole supply chain.

The prioritisation of safety is one of the values I look for in a new employer.  Do you?

We all need to ensure that our employer places great value on safety.  If not, challenge them, start the ball rolling yourself or leave.

Compromises in safety is not acceptable!

References;
Summary of our WH&S law from Australian Industry Group